The Park Place Lithium Brine Project consists of 1,602,209 acres of contiguous MIM permits (89 MIM permits) that overlie the lithium-rich Devonian aged, Leduc Formation, Carbonate Reef complex (Woodbend Group) and the underlying Beaverhill Lake Group (Swan Hills FM) (Figure 1). These Formations are confined aquifers and are considered to be hydraulically connected. The Leduc Formation reaches thicknesses of just over 300m and the Swan Hills Formation is up to 250 metres thick within the Company’s Metallic and Industrial Mineral (MIM) permits. LithiumBank considers both Formations highly favourable for potential brine production and intends for both to be the focus of continued sampling and study to lead to a NI 43-101 Resource Estimate. The contiguous MIM permits covering the Formations give the Company the dominant position over the contained lithium-rich brines.

The Leduc and Swan Hills Formations at Park Place, formally known as Fox Creek, have been producing petroleum and natural gas since the 1950’s and there are over 215 past producing wells within the Company’s MIM permits (Figure 1). This legacy hydrocarbon extraction infrastructure has enabled the Company to easily collect brine samples from existing wells without drilling new exploration holes. Furthermore, historical production logs and reports are expected to significantly reduce the timelines required to complete detailed geological and hydrogeological studies (News Release, Sept. 27, 2022). LithiumBank expects that by leveraging the extensive infrastructure in Park Place region, including highways, all-weather gravel roads, permitted drill sites, and a local skilled labour force, the Company will be able to rapidly advance the project.

The Leduc and Swan Hills Formations have historically been known to host some of the highest grades of lithium-in-brine in Alberta, with samples that range from 76 mg/L to 130 mg/L lithium within the Park Place MIM permit area (ags.aer.ca/publication/ofr-2011-10). These samples were provided to the Alberta Geological Survey by Petro-operators in 2010 and are considered historical. The samples have not been verified by a Qualified Person (QP) under the latest NI 43-101 Standards of Disclosure, cannot be relied upon and are not indicative of lithium-in-brine grades at the Formations. There has been insufficient exploration of the Formations to define a mineral resource and it is uncertain if further exploration will result in delineation of a mineral resource at either of the Leduc or Swan Hills Formations. Historical sampling results are mentioned as a reference only until such time they have been verified.

Independent Director, Paul Matysek comments, “We are very pleased to see our first Park Place brine samples reflect lithium grades from historical assays. The Park Place area has historically reported some of the highest-grade lithium brine samples in Alberta and it is very encouraging that our sampling to date confirms that lithium grades at Park Place tend to be higher than typically seen anywhere in Alberta. We look forward to providing further results from additional planned sampling campaigns and incorporating them in a NI 43-101 Resource Estimate.”

Samples were analysed at AGAT Laboratories, an ISO 17025:2017 certified lab, in Calgary Alberta. LithiumBank implemented strict Quality Control and Quality Assurance (QA/QC) protocols for the analysis. Testing of the three samples included three duplicates, two blanks and one standard reference material. Samples were collected from the well head by BV Labs technicians and couriered to AGAT Laboratories for analysis in Calgary.

The potential of lithium-in-brine as an industrial resource was first recognized in a study authored by B. Hitchon et al. in 1993 (Hitchon et al, 1993) entitled “Industrial Mineral Potential of Alberta Formation Waters”. The study used 130,000 Alberta Formation water samples to determine areas of potential economic interest. The study highlights the Boardwalk and Park Place areas (Sturgeon Lake, and Fox Creek areas, respectfully) specifically as having the highest lithium grades in the Provence.

The Park Place area was the focus of an additional study, authored by D.R. Eccles and H. Berhane, entitled “Geological Introduction to Lithium-Rich Formation Water with Emphasis on the Fox Creek Area of West-Central Alberta (NTS 83F and 83K)” (ags.aer.ca/publication/ofr-2011-10). The report highlights significant lithium potential in three different formations, the Leduc (Woodbend), Nisku (Winterburn), and Swan Hills (Beaverhill Lake Group), is supported by historical lithium brine samples that range from 76 mg/l to 130 mg/l lithium in these formations. 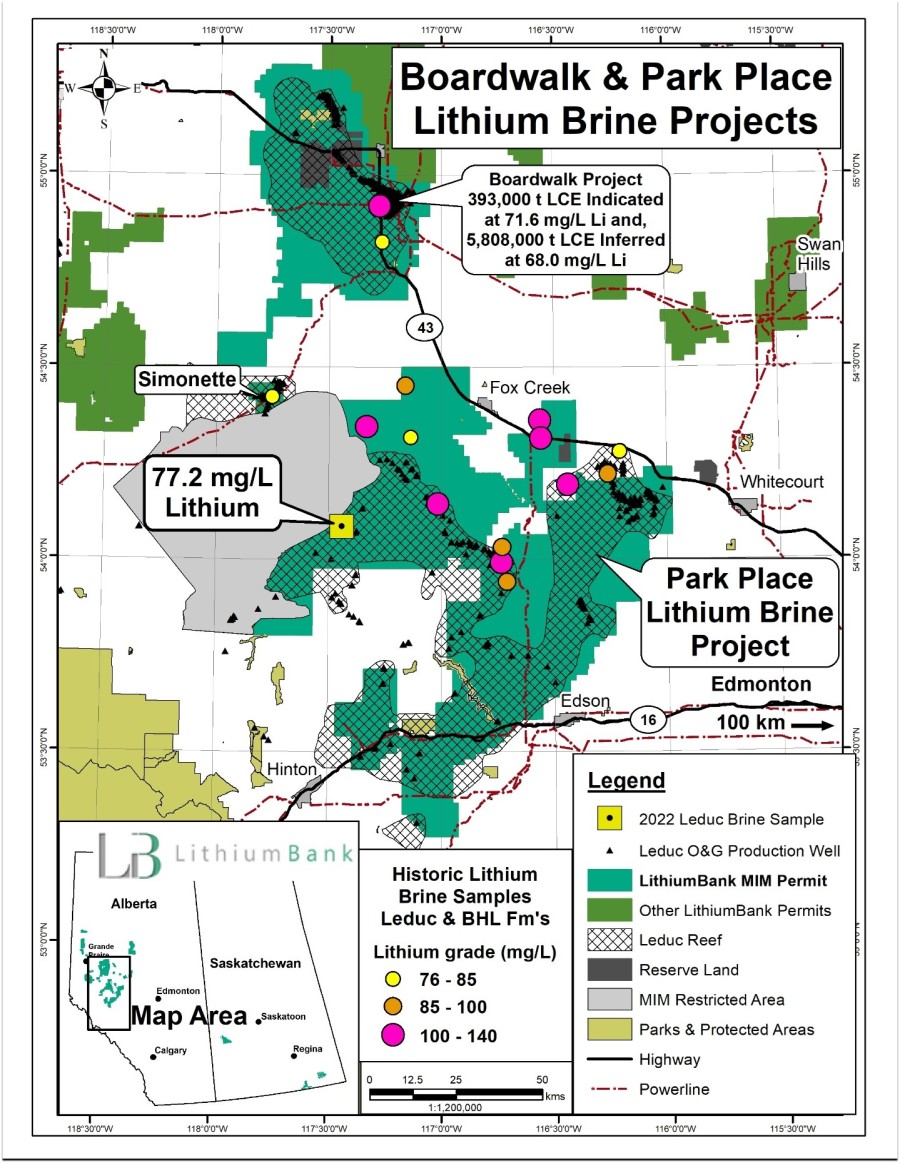 The scientific and technical disclosure in this news release has been reviewed and approved by Mr. Kevin Piepgrass (Chief Operations Officer, LithiumBank Resources Corp.), who is a Member of the Association of Professional Engineers and Geoscientists of the Province of British Columbia (APEGBC) and is a Qualified Person (QP) for the purposes of National Instrument 43-101. Mr. Piepgrass consents to the inclusion of the data in the form and context in which it appears.

LithiumBank Resources Corp. is an exploration and development company focused on lithium-enriched brine projects in Western Canada where low-carbon-impact, rapid DLE technology can be deployed. LithiumBank currently holds over 4 million acres of mineral titles, 3.68M acres in Alberta and 326K acres in Saskatchewan. LithiumBank’s mineral titles are strategically positioned over known reservoirs that provide a unique combination of scale, grade and exceptional flow rates that are necessary for a large-scale direct brine lithium production. LithiumBank is advancing and de-risking several projects in parallel of the Boardwalk Lithium Brine Project.

Rob Shewchuk
CEO & Director
This email address is being protected from spambots. You need JavaScript enabled to view it.
(778) 987-9767