Feasibility Report to be Supported by Resource Growth Drilling at High-Grade, Near Surface Deposit at PLS

FISSION URANIUM CORP. ("Fission" or "the Company") is pleased to announce that it will commence its Feasibility Study ("FS" or the "Study") for its' 100% owned PLS high-grade uranium project, in the Athabasca Basin region of Saskatchewan, Canada. The feasibility work will kick-off with Phase 1, comprised of extensive data collection using drilling and other fieldwork. The FS follows the results of the Company's Pre-Feasibility Study detailing an underground-only mining scenario, which has outlined the potential for PLS to be one of the lowest operating cost uranium mines in the world. Phase 1 will commence during June 2021 with completion expected by Q2, 2022. Concurrent with Phase 1 field work, a 25-hole core drill program targeting the R840W Zone, will commence by mid-June.  The R840W drill program will aim to upgrade the majority of the R840W resource to Indicated category, which then would have the potential to be included in the resource model used for the FS.

Ross McElroy, CEO for Fission, commented, "The commencement of a Feasibility Study is a major milestone for Fission, and also for the emerging uranium district and its local communities in the Western Athabasca Basin of Saskatchewan, Canada. We have several important advantages heading into the Feasibility stage, including a Pre-Feasibility Study showcasing exceptional potential economics and minimal environmental footprint, extensive environmental data from years of baseline studies, and an unparalleled technical team."

The Feasibility Study will be led by Fission's VP Project Development, Gary Haywood, a professional Mining Engineer with 35 years' experience, including seven years with Cameco as General Manager at the McArthur River and Senior Mine Engineer at the Eagle Point uranium mining operations in Saskatchewan, Canada.

The FS will comprise two Phases: Data collection and assessment (Phase 1) and Design (Phase 2). Phase 2 will use the data collected from Phase 1 to further refine the design of the underground mine, surface infrastructure plans and Tailings Management Facility to be incorporated into the Feasibility Study, and more detailed plans for Phase 2 will be announced in the near future.

For the Phase 1 program, the company has been focussed on optimizing the site surface layout and has made adjustments to the location of the ramp access, waste stockpiles and processing plant – see Map 1 for updated plans.

Phase 1 Activity will Include:

Feasibility Study Drill Program: Extensive drilling (73 holes in 9,945m) will be carried out for the collection of all required geotechnical, hydrogeological, geochemical and metallurgical data. Four drill rigs will be deployed for this purpose.

R840W Drill Program: Additional Drilling Aimed at Increasing Indicated Resource Used in Feasibility Study: Concurrent to the Phase 1 program, Fission is deploying two core drill rigs to carry out Phase 2 of its resource expansion program (25 holes in 5,830m). This will focus on upgrading the majority of the R840W zone from Inferred to Indicated category. This program is expected to be complete by August 2021 and assay results will be disclosed when received.

Infill drilling will result in intersection spacing of ~15m x 20m (horizontal / vertical), between holes, which has the potential to convert the majority of the R840W zone to Indicated category and thus the potential to be included in the feasibility study resource.

The R840W drill program follows the encouraging results of a 20-hole (7,148m) successfully completed during the winter 2021 program, which targeted the conversion of Inferred to Indicated on key sections of the R780W zone.

Lead Engineering Firm. In preparation for Phase 2 of the FS, Fission is in the process of selecting a lead engineering firm and will announce its choice once confirmed. 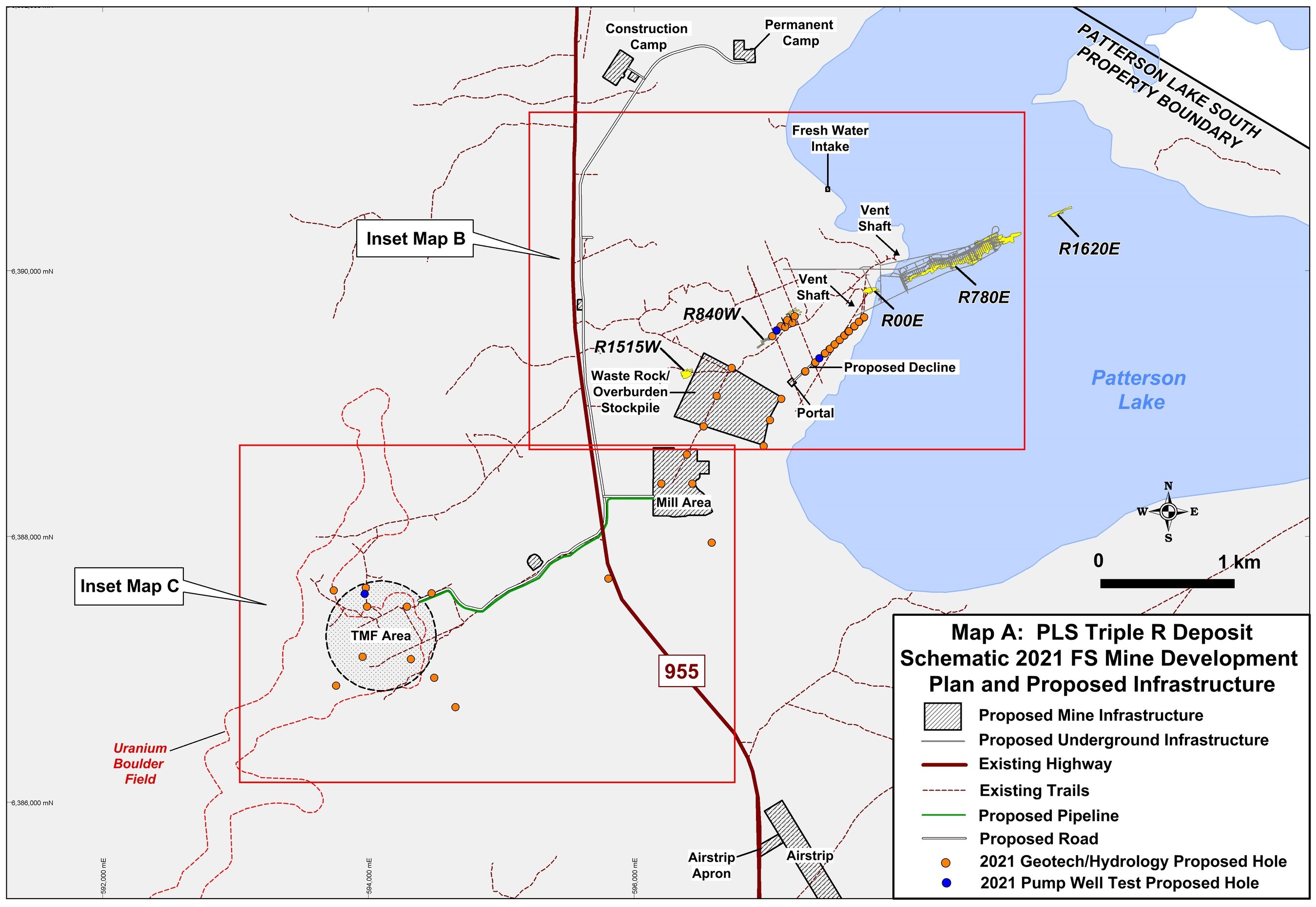 Inset maps B & C can be viewed at https://fissionuranium.com/projects/triple-r-deposit/maps-triple-r/.

Uranium mineralization of the Triple R deposit at PLS occurs within the Patterson Lake Conductive Corridor and has been traced by core drilling over ~3.18 km of east-west strike length in five separated mineralized "zones" which collectively make up the Triple R deposit. From west to east, these zones are: R1515W, R840W, R00E, R780E and R1620E. Through successful exploration programs completed to date, Triple R has evolved into a large, near surface, basement hosted, structurally controlled high-grade uranium deposit.  The discovery hole was announced on November 05, 2012 with drill hole PLS12-022, from what is now referred to as the R00E zone.

The Company completed and filed a prefeasibility "PFS" study on November 07, 2019 titled "Pre-Feasibility Study on the Patterson Lake South Property Using Underground Mining Methods, Northern Saskatchewan, Canada".  The report summarizes the Pre-Feasibility Study ("UG PFS"), which outlines an underground-only mining scenario for PLS which to date has only considered the R00E and R780E zones.  Further work, including additional drilling may provide sufficient data for future inclusion of the R1515W, R840W and R1620E zones into the Feasibility Study mine plan.

Mineralization along the Patterson Lake Corridor trend remains prospective along strike in both the western and eastern directions. Basement rocks within the mineralized trend are identified primarily as mafic volcanic rocks with varying degrees of alteration.  Mineralization is both located within and associated with mafic volcanic intrusives with varying degrees of silicification, metasomatic mineral assemblages and hydrothermal graphite. The graphitic sequences are associated with the PL-3B basement Electro-Magnetic (EM) conductor.

The 31,039 hectare PLS project is 100% owned and operated by Fission Uranium Corp. PLS is accessible by road with primary access from all-weather Highway 955, which runs north to the former Cluff Lake mine and passes the nearby NexGen Arrow deposit located 3km to the east and UEX-Areva Shea Creek discoveries located 50km to the north.

The technical information in this news release has been prepared in accordance with the Canadian regulatory requirements set out in National Instrument 43-101 and reviewed on behalf of the company by Ross McElroy, P.Geol., President and CEO for Fission Uranium Corp., a qualified person.

Fission Uranium Corp. is a Canadian based resource company specializing in the strategic exploration and development of the Patterson Lake South uranium property - host to the class-leading Triple R uranium deposit - and is headquartered in Kelowna, British Columbia.  Fission's common shares are listed on the TSX Exchange under the symbol "FCU" and trade on the OTCQX marketplace in the U.S. under the symbol "FCUUF."

ON BEHALF OF THE BOARD