CORPUS CHRISTI, Texas, Jan. 24, 2023 /CNW/ - Uranium Energy Corp (NYSE American: UEC) (the "Company" or "UEC") is pleased to announce that it has filed a Technical Report Summary ("TRS") on EDGAR disclosing updated mineral resources for the Company's Horseshoe-Raven Project (the "Project" or "Horseshoe-Raven"). UEC indirectly owns 100% of the Project.

The TRS was prepared under S-K 1300 and was filed on January 23, 2023 with the SEC through EDGAR on Form 8-K and is also available on SEDAR as a "Material Document" filed on January 23, 2023. The TRS was prepared on behalf of the Company by Nathan A. Barsi, P.Geo., UEC's District Geologist, Roger M. Lemaitre, P.Eng., P.Geo., former President and CEO of UEX, and Christopher J. Hamel, P.Geo., UEC's Vice President Exploration, Canada.

Given the shallow depths to mineralization (between 100 and 450 m depth), uranium grades and lack of sandstone cover, the Horseshoe and Raven Deposits are potentially amenable to combined conventional open pit and underground mine development and should not require costly ground freezing to prevent water incursion or extra radiation protection measures routinely employed at many of Saskatchewan's uranium operations.

The current mineral resource estimate includes the results from 715 diamond drill holes totalling 210,385 m which were drilled from 2005 to 2011. Mineralized wireframes of the Horseshoe and Raven Deposits were prepared at a 0.02% U3O8 mineralized threshold to constrain the mineral resource estimate at each deposit area. The estimate was completed by inverse distance weighting squared algorithm using Datamine Studio RM software and utilized block sizes of 5 x 5 x 2.5 m for parent blocks and 0.25 x 0.25 x 0.25 m subcells. The impact of anomalously high-grade samples were controlled through a process of grade capping for all zones.

Summary capital and operating cost estimates are not included with the TRS since the Company is reporting the results of an initial assessment.

The TRS has been prepared and the technical information in this news release respecting the TRS has been reviewed by each of Nathan A. Barsi, P.Geo., UEC's District Geologist, Roger M. Lemaitre, P.Eng., P.Geo., and Christopher J. Hamel P.Geo., Vice President Exploration, Canada, for the Company, all Qualified Persons under Item 1302 of S-K 1300. 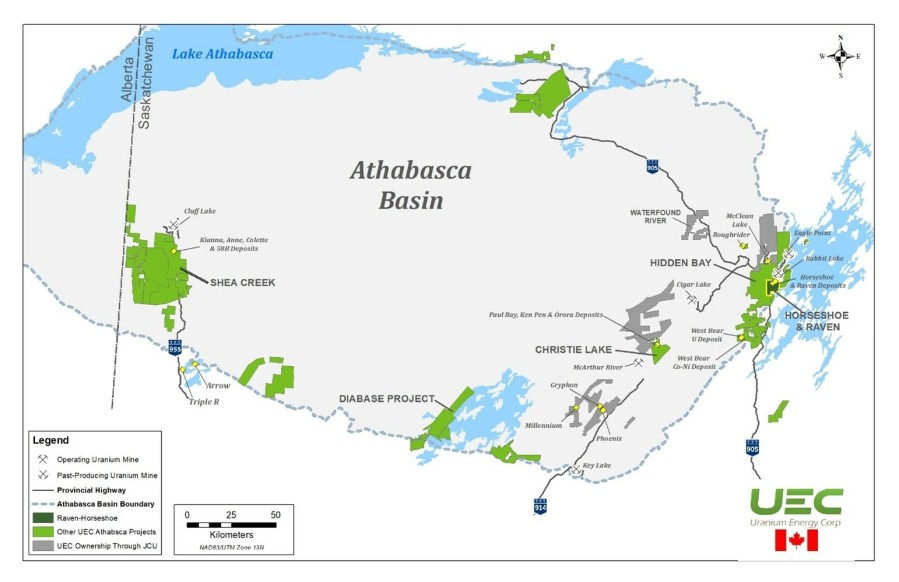 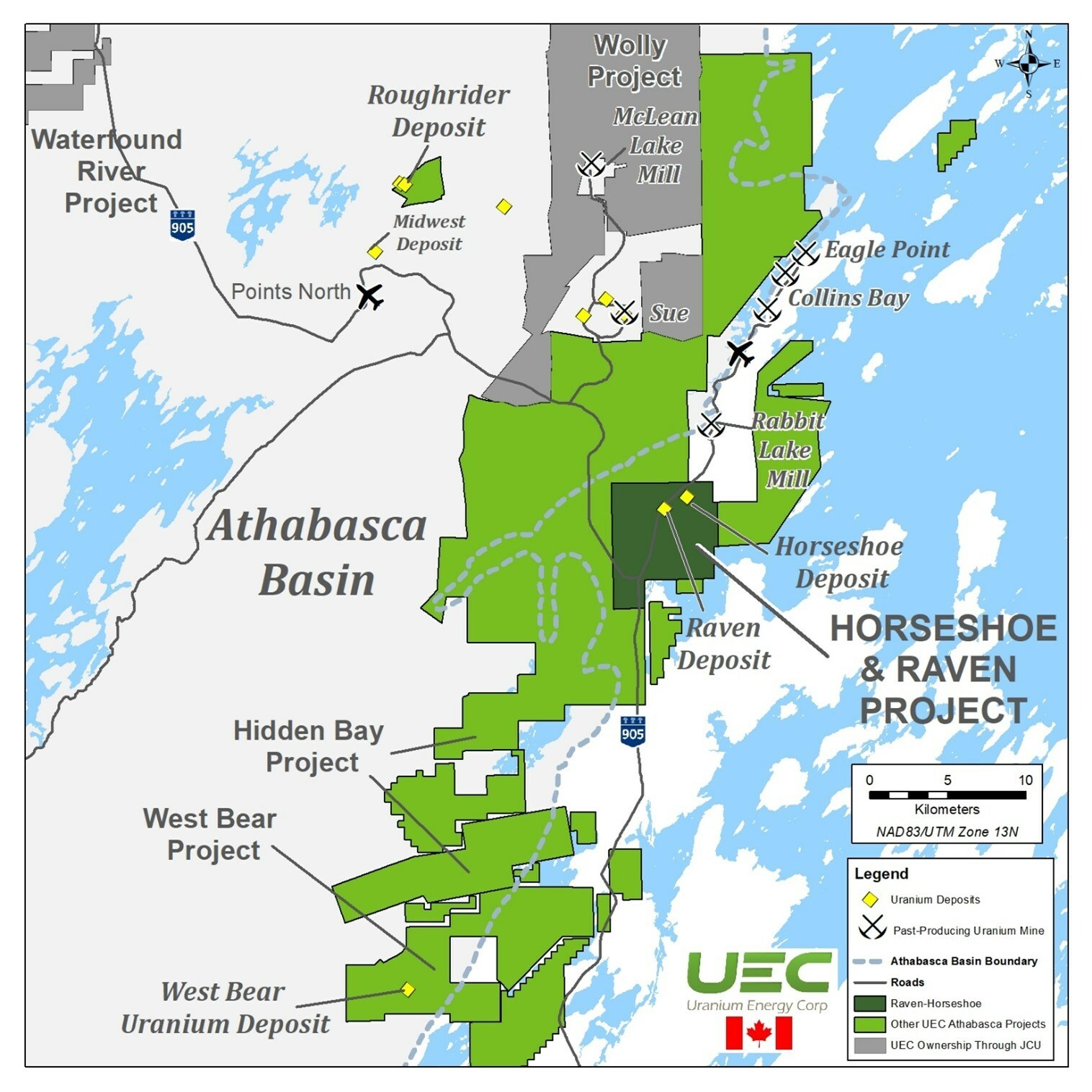 Uranium Energy Corp is the fastest growing supplier of the fuel for the green energy transition to a low carbon future. UEC is the largest, diversified North American focused uranium company, advancing the next generation of low-cost, environmentally friendly In-Situ Recovery ("ISR") mining uranium projects in the United States and high-grade conventional projects in Canada. The Company has two production-ready ISR hub and spoke platforms in South Texas and Wyoming. These two production platforms are anchored by fully operational central processing plants and served by seven U.S. ISR uranium projects with all their major permits in place. Additionally, the Company has diversified uranium holdings including: (1) one of the largest physical uranium portfolios of North American warehoused U3O8; (2) a major equity stake in Uranium Royalty Corp., the only royalty company in the sector; and (3) a Western Hemisphere pipeline of resource stage uranium projects. The Company's operations are managed by professionals with decades of hands-on experience in the key facets of uranium exploration, development and mining.

Except for the statements of historical fact contained herein, the information presented in this news release constitutes "forward-looking statements" as such term is used in applicable United States and Canadian securities laws. These statements relate to analyses and other information that are based on forecasts of future results, estimates of amounts not yet determinable and assumptions of management. Any other statements that express or involve discussions with respect to predictions, expectations, beliefs, plans, projections, objectives, assumptions or future events or performance (often, but not always, using words or phrases such as "expects" or "does not expect", "is expected", "anticipates" or "does not anticipate", "plans, "estimates" or "intends", or stating that certain actions, events or results "may", "could", "would", "might" or "will" be taken, occur or be achieved) are not statements of historical fact and should be viewed as "forward-looking statements". Such forward looking statements involve known and unknown risks, uncertainties and other factors which may cause the actual results, performance or achievements of the Company to be materially different from any future results, performance or achievements expressed or implied by such forward-looking statements. Such risks and other factors include, among others, the actual results of exploration activities, variations in the underlying assumptions associated with the estimation or realization of mineral resources, the availability of capital to fund programs and the resulting dilution caused by the raising of capital through the sale of shares, accidents, labor disputes and other risks of the mining industry including, without limitation, those associated with the environment, delays in obtaining governmental approvals, permits or financing or in the completion of development or construction activities, title disputes or claims limitations on insurance coverage. Although the Company has attempted to identify important factors that could cause actual actions, events or results to differ materially from those described in forward-looking statements, there may be other factors that cause actions, events or results not to be as anticipated, estimated or intended. Many of these factors are beyond the Company's ability to control or predict. There can be no assurance that such statements will prove to be accurate as actual results and future events could differ materially from those anticipated in such statements. Accordingly, readers should not place undue reliance on forward-looking statements contained in this news release and in any document referred to in this news release. Important factors that may cause actual results to differ materially and that could impact the Company and the statements contained in this news release can be found in the Company's filings with the Securities and Exchange Commission. For forward-looking statements in this news release, the Company claims the protection of the safe harbor for forward-looking statements contained in the Private Securities Litigation Reform Act of 1995. The Company assumes no obligation to update or supplement any forward-looking statements whether as a result of new information, future events or otherwise. This news release shall not constitute an offer to sell or the solicitation of an offer to buy securities.

Else Nutrition Announces Closing of First Tranche of Institutional Investment for Gross Proceeds of US$4.25M

Hillcrest Energy Technologies Wraps Up 2022, a Year of Technology and Commercialization Milestones

DevvStream provides upfront capital for sustainability projects in exchange for carbon credit rights. Through these rights, the company generates and manages carbon credits by utilizing the most technologically advanced...