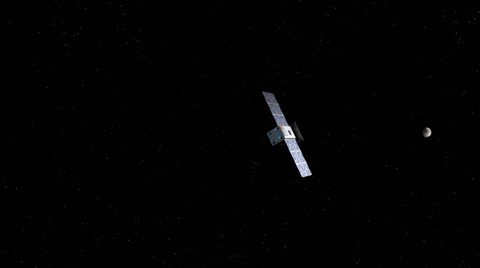 Apogee occurs when a satellite follows a non-circular orbit around the earth, creating an orbital ellipse with the center of the earth at one focus. Such a satellite has variable altitude and variable orbital speed. The point of highest altitude is called apogee. Details of CAPSTONE’s apogee are as follows:

The dominance of the Sun’s gravitational pull enables CAPSTONE’s extreme distance as part of a ballistic lunar transfer (BLT) trajectory. CAPSTONE is using a BLT to reach and test the unique orbit around the Moon known as the Near Rectilinear Halo Orbit (NRHO). The NRHO is the intended orbit for Gateway, a lunar space station that will support NASA’s Artemis program. The significantly elongated orbit forms a precise balance point in the gravities between the Earth and the Moon and requires less propulsion capability for spacecraft flying to and from the Moon’s surface than circular orbits.

“Terran Orbital is thrilled to guide CAPSTONE through and beyond apogee,” said Terran Orbital Co-Founder, Chairman, and Chief Executive Officer Marc Bell. “We greatly value our partnership with Advanced Space and are forever grateful to NASA for creating the historic Artemis program. Together, we are bringing people back to the Moon.”

The 55-pound CAPSTONE will arrive at the Moon on November 13.

Pond Technologies has developed a proprietary system that can profitably transform CO2 into valuable products. The company's carbon business focuses on absorbing greenhouse gas emissions, transforming these into...