Nuvve's vehicle-to-grid software, bidirectional charging equipment and services – from design to operation and maintenance – will be used to deploy the districts' new fleets and manage their electricity storage and grid exports

Nuvve Holding Corp. (Nasdaq: NVVE), a global cleantech company electrifying the planet through its intelligent energy platform, announced today that 10 school district customers have received a combined $24,155,000 in funding through the EPA Clean School Bus Rebate Program to support the deployment of 61 electric, vehicle-to-grid (V2G) capable school buses and chargers in disadvantaged school districts across the United States. Nuvve and its school district customers will now begin activating their site design and development plans, procurement of Nuvve V2G-capable DC fast chargers and partner electric school buses (ESBs). The majority of the funded programs are expected to be operational in 2023. 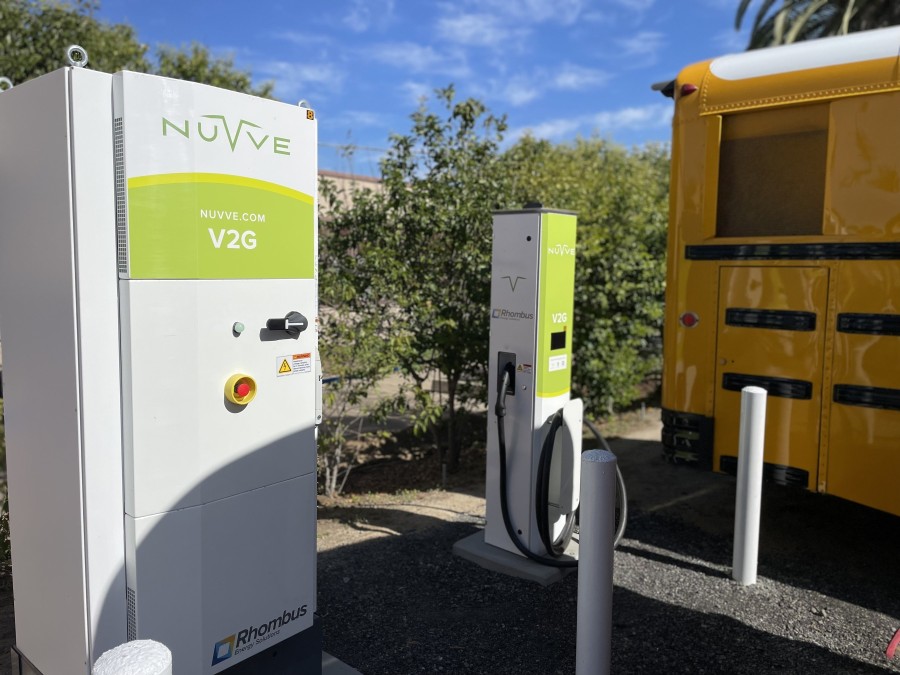 "As a country and a planet, we must continue to innovate our way forward as we shift away from diesel and other polluting fuels and power sources," said Nuvve CEO and Chairman Gregory Poilasne. "Nuvve pioneered V2G technology in the U.S. and around the world. We're glad the EPA is funding V2G-capable electric school buses as a smart investment in better renewable energy integration and grid reliability, as well as cleaner commutes for kids."

V2G-capable ESBs can generate additional revenues while also providing resiliency to the grid.  This deployment of 61 ESBs could earn potential future grid service revenues of $4.4 million over the estimated useful life of the vehicle, depending on prevailing utility electric rates and rate structures, and assuming a maximum battery capacity of 155 kilowatt hours and 60 kilowatts of charging station capacity[1]. The V2G savings are in addition to diesel fuel savings and result from charging during off-peak periods and discharging during times of peak grid load when rates are highest. Nuvve's proprietary GIVe™ software platform manages the vehicle charging and discharging, using predictive analytics to ensure bus batteries have more than enough charge for their scheduled routes. GIVe also meets the highest certification standards recognized by America's leading utility providers to ensure its interoperability with other systems utilities use to manage distributed energy resources such as battery storage, rooftop solar and more.

"V2G is a world-class technology that all school districts need to embrace. When we learned how we could improve the air our students and drivers breathe while also generating a steady source of revenue for our district, we were sold," said Katie Delano, Director of Transportation Services, Coalinga-Huron Unified School District, a district of 11 schools and 4,500 students in Fresno County, California. "Nuvve has been there with us throughout this process, and we look forward to leaning on their expertise from site design to deployment."

About Nuvve Holding Corp.
Nuvve Holding Corp. (Nasdaq: NVVE) (Nuvve) is accelerating the electrification of transportation through its proprietary vehicle-to-grid ("V2G") technology. Its mission is to lower the cost of electric vehicle ownership while supporting the integration of renewable energy sources, including solar and wind. Nuvve's Grid Integrated Vehicle, GIVe™, platform is refueling the next generation of electric vehicle fleets through intelligent, bidirectional charging solutions. Since its founding in 2010, Nuvve has launched successful V2G projects on five continents and is deploying commercial services worldwide by developing partnerships with utilities, automakers, and electric vehicle fleets. Nuvve is headquartered in San Diego, Calif. and can be found online at www.nuvve.com.

Nuvve and associated logos are among the trademarks of Nuvve and/or its affiliates in the United States, certain other countries and/or the EU. Any other trademarks or trade names mentioned are the property of their respective owners.

Nuvve Forward-Looking Statements
The information in this press release includes "forward-looking statements" within the meaning of Section 27A of the Securities Act of 1933, as amended, and Section 21E of the Securities Exchange Act of 1934, as amended. All statements, other than statements of present or historical fact included in this press release, regarding Nuvve and Nuvve's strategy, future operations, estimated and projected financial performance, prospects, plans and objectives are forward-looking statements. When used in this press release, the words "could," "should," "will," "may," "believe," "anticipate," "intend," "estimate," "expect," "project," the negative of such terms and other similar expressions are intended to identify forward-looking statements, although not all forward-looking statements contain such identifying words. These forward-looking statements are based on management's current expectations and assumptions about future events and are based on currently available information as to the outcome and timing of future events. Except as otherwise required by applicable law, Nuvve disclaims any duty to update any forward-looking statements, all of which are expressly qualified by the statements in this section, to reflect events or circumstances after the date of this press release. Nuvve cautions you that these forward-looking statements are subject to numerous risks and uncertainties, most of which are difficult to predict and many of which are beyond the control of Nuvve. In addition, Nuvve cautions you that the forward-looking statements contained in this press release are subject to the following factors: (i) risks related to the rollout of Nuvve's business and the timing of expected business milestones; (ii) Nuvve's dependence on widespread acceptance and adoption of electric vehicles and increased installation of charging stations; (iii) Nuvve's ability to maintain effective internal controls over financial reporting (iv) Nuvve's current dependence on sales of charging stations for most of its revenues; (v) overall demand for electric vehicle charging and the potential for reduced demand if governmental rebates, tax credits and other financial incentives are reduced, modified or eliminated or governmental mandates to increase the use of electric vehicles or decrease the use of vehicles powered by fossil fuels, either directly or indirectly through mandated limits on carbon emissions, are reduced, modified or eliminated; (vi) potential adverse effects on Nuvve's backlog, revenue and gross margins if customers increasingly claim clean energy credits and, as a result, they are no longer available to be claimed by Nuvve; (vii) the effects of competition on Nuvve's future business; (viii) risks related to Nuvve's dependence on its intellectual property and the risk that Nuvve's technology could have undetected defects or errors; (ix) the risk that we conduct a portion of our operations through a joint venture exposes us to risks and uncertainties, many of which are outside of our control; (x) that our joint venture with Levo Mobility LLC may fail to generate the expected financial results, and the return may be insufficient to justify our investment of effort and/or funds; (xi) changes in applicable laws or regulations; (xii) the COVID-19 pandemic and its effect directly on Nuvve and the economy generally; (xiii) risks related to disruption of management time from ongoing business operations due to our joint ventures; (xiv) risks relating to privacy and data protection laws, privacy or data breaches, or the loss of data; (xv) the possibility that Nuvve may be adversely affected by 3 other economic, business, and/or competitive factors, including increased inflation and interest rates, and the Russian invasion of Ukraine; and (xvi) risks related to the benefits expected from the $1.2 trillion dollar infrastructure bill passed by the U.S. House of Representatives (H.R. 3684). Should one or more of the risks or uncertainties described in this press release materialize or should underlying assumptions prove incorrect, actual results and plans could differ materially from those expressed in any forward-looking statements. Additional information concerning these and other factors that may impact the operations and projections discussed herein can be found in the Annual Report on Form 10-K filed by Nuvve with the Securities and Exchange Commission (SEC) on March 31, 2022, and in the other reports that Nuvve has, and will file from time to time with the SEC. Nuvve's SEC filings are available publicly on the SEC's website at www.sec.gov.

Nuvve Press Contact
(W)right On Communications / David Cumpston
This email address is being protected from spambots. You need JavaScript enabled to view it.; +1 415-902-4461

Nuvve Investor Contact
ICR Inc.
This email address is being protected from spambots. You need JavaScript enabled to view it.; +1 646-200-8872

Else Nutrition is changing the face of early childhood nutrition with clean, sustainable, plant-based products. The company has developed the world’s first whole plant-based infant formula that is targeting the $100+ billion global...

DevvStream provides upfront capital for sustainability projects in exchange for carbon credit rights. Through these rights, the company generates and manages carbon credits by utilizing the most technologically advanced...